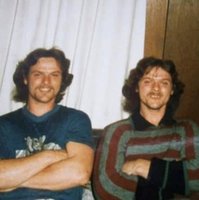 Fred passed away quietly in his sleep with his faithful pet “Chewy” by his side.  He was born in Dallas, Oregon and passed away in Portland, Oregon.   Raised in Oregon by parents Gordon Ridenour and Coleen (Dhabolt) Ridenour with his seven siblings.

Fred was a very happy man and most happy when with his family. “Family meant everything to him”.    He was always smiling and willing to share whatever someone might need.  He was very outgoing and made friends easily.  He loved agate hunting on the Oregon coast, watching football, his favorite team being the Minnesota Vikings, collecting baseball cards and picking mushrooms.  He was a very spiritual man and enjoyed many aspects of Native American culture including spending time in sweat lodges.

Fred was retired, but had worked as a pipe fitter and a roofer and most recently as a cook.

He was preceded in death by his Mother, Coleen (Dhabolt) Ridenour.  Grandparents Charlie and Mary Dhabolt.  His twin brother, Ted Ridenour-Dyer and younger brother Nicky Ridenour-Dyer, and by his niece, Ashley Hinson.

He had shared his desire to have some of his ashes spread on the Oregon Coast in Yachats, Oregon, where he lived for many years, and some of his ashes interned next to his twin brother, Ted, whom preceded him in death at Fairview Cemetery in Mill City, Oregon.  His family is discussing plans for a celebration of life and to carry out his final wishes, dates and times will be announced when finalized.

When it comes your time to die, be not like those whose hearts are filled with the fear of death, so that when their time comes, they weep and pray for a little more time to live their lives over again in a different way. Sing your death song and die like a hero going home. —CHIEF TECUMSEH

Oh, Great Spirit, whose voice I hear in the winds

Whose breath gives life to the world, hear me

I come to you as one of your many children

I am small and weak

I need your strength and wisdom

May I walk in beauty

Make my eyes ever behold the red and purple sunset.

Make my hands respect the things you have made

And my ears sharp to your voice.

Make me wise so that I may know the things you have taught your children.

The lessons you have written in every leaf and rock

Not to be superior to my brothers, but to fight my greatest enemy....myself

Make me ever ready to come to you with straight eyes,

So that when life fades as the fading sunset,

May my spirit come to you without shame.