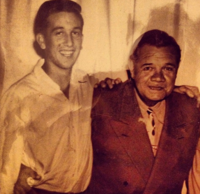 Robert “Bob” Pinder was a revered member of his community, parish, and big, boisterous family.

Bob was born in Nampa, Idaho to Reginald Pinder and Viola Cornelius Pinder. He grew up in Boise with his sisters Dottie and Millie, and graduated from Boise High School in 1947, where his lifelong love of sports was cultivated. Bob played football, basketball, and excelled at baseball. He led his American Legion team to the sectional playoff as team captain, narrowly missing the World Series. Bob got to meet the main speaker at the Sectionals Banquet and had his photo taken with Babe Ruth.

After high school, Bob worked in the dental supply business and continued to play amateur sports. In 1951, he enlisted in the Air Force as the Korean conflict started up, thinking he would be able to stay stateside. Shortly after enlisting, he was stationed in Taegu, Korea for a year as a medical technician! In 1954, Bob was sent to the Portland Air Base where one of his duties was vaccinating base pets. He met the love of his life, Joanne Ellis, when she brought her dog to get vaccinated at the urging of some Bob’s buddies whom she knew. He had her come back weekly until he finally mustered the courage to ask her out. The rest is history - they married on February 19, 1955 and welcomed six children over the following decade.

Bob was a pillar in his community. He practiced optometry for 30 years in the St. Johns neighborhood, where he was an active member of the local Kiwanis Club. He was a beloved member of the St. Rose of Lima and Central Catohlic communities. Over the years, he and Joanne hosted progressive dinners, attended fundraisers and events, and cherished the friendships forged in these communities. Bob lived in strong faith and service to others, and devoted his time and support to the Archdiocese and organizations like St. Vincent de Paul, CC Ram Boosters (a founding member) and CYO sports.

A zealous sports fan until the end, Bob was known for his legendary New Year’s Day football and Super Bowl parties. After a long, arduous hospital stint in his last month, he made it home just in time to watch Super Bowl LV with family in the comfort of his own chair. He was an avid golfer and left the legacy of a long-standing family golf tournament, a tradition he started in the 1980s with his brother in law and partner in crime, Clare Shrum. Bob’s comedic timing was unparalleled, he loved working daily crossword puzzles, and was a fierce and frequent cribbage player. He played (and won) his last game against Fr. Matt Libra in his final days.

Bob’s greatest pride and joy was his family. After Joanne’s untimely death in 2008, he was unwavering in his commitment to family traditions -- sending birthday cards to all his children and grandchildren, hosting Lebanese feasts to honor Joanne’s heritage, and gathering around the piano to sing with his family; from raucous Christmas carols to stirring renditions of the family anthems, Piano Man (Billy Joel) and What a Wonderful World (Louis Armstrong).

A funeral Mass will be held at St. Rose of Lima Catholic Church on Feb. 27 at 1:00 p.m. It will be live streamed at: https://www.youtube.com/channel/UCUwWB5XpjiPOZwXu3lA5z7Q/featured.

Due to COVID restrictions, there can only be a limited number of attendees at the funeral. More to come on a celebration to be held this summer.

In lieu of flowers, we invite you to make a donation to the Bob and Joanne Pinder Endowed Scholarship at St. Rose School or Central Catholic High School.