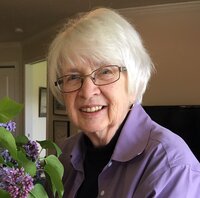 Marjorie Gwilliam was born in Salt Lake City, graduated Phi Beta Kappa from the University of Utah in 1950, and married G. Frank Gwilliam the same year. She studied in the Philosophy Department at the University of California at Berkeley and also worked as a secretary for the Department of Psychiatry. In 1957, she and Frank moved to Portland, where they were important members of the Reed College community for many years. In the 1970s, Marjorie went to Portland State University to get a master’s degree in Special Education and spent the next years until her retirement tutoring children with learning disabilities, a job she loved and excelled at. Many of her students kept in touch with her for years after they finished school. She loved classical music, her garden, reading, Ancient Greek, and traveling—and was devoted to her children, grandchildren, and friends. She is survived by her son, Jeff (Amy); daughter, Tassie Gwilliam (Frank Stringfellow); and her grandchildren, David, Jessica, and Adam Gwilliam; Nicholas Stringfellow; and Anna and Nora Seidman. The family would like to thank the staff at Willamette View for taking such good care of her. A memorial will be scheduled at a later date. Contributions may be made to the Portland Art Museum, Chamber Music Northwest, or Crystal Springs Rhododendron Garden.