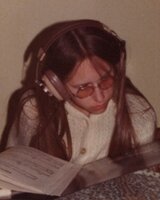 Margaret Anne Lidster
Date of birth: 11-24-1961
Date of death: 10-12-2021
Margaret Anne Lidster was born on November 11, 1961 in Portland, Oregon and passed away under the care of her father, Kenneth and brother Kevin, in the family home in Gladstone, Oregon.

The sixth child of Kenneth and Margaret, Margaret Anne was their only daughter.  A longtime resident of Gladstone, Oregon she attended the Gladstone School System from grade one through her senior year at Gladstone High School where she excelled in the music program, sitting as first chair flautest in concert band and pep band and as the piano player for the school's stage band.
At home Margaret Anne learned and played the music of her favorite performer, Elton John and would sing along with her brother Steven as she played.  Margaret's appreciation of music also extended back to the classical era of Mozart and Beethoven.

After high school, Margaret Anne worked in the office of the family business, Cytology Reference Labortories, while she simultaneously attended Portland State University.

An avid fan of movies she was particularly fond of Basil Rathbone’s depiction of Sherlock Holmes who topped a long list of her favorite screen actors.  When Star Wars first became a sensation in 1970, along with her brothers became fans of the franchise.

She was also a voracious reader.  Along side of the SF/Fantasy genre of Lord of the Rings and the other greats who stand alongside Tolkien, she also was an avid fan of murder mysteries from Agatha Christy and Earle Stanley Gardner in print and in performance.   Her love of Perry Mason could easily be shown when she could name the murderer within the first five minutes of an episode.

In her early 20's Margaret fell ill with a sickness that would plague her through her lifetime and would eventually claim her life.
Margaret Anne is survived by her father, Kenneth William, and her brothers, Vincent (Janet), Kenneth R.(Therese), Kevin, David, and Steven(Kelly.)

From her favorite performer, Elton John, her family dedicates "Your Song."