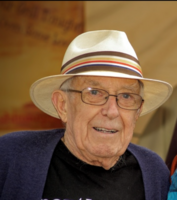 Byron McClintock, 92, of Klamath Falls, Oregon, passed away peacefully of natural causes on March 31st, 2022, surrounded in love by his family and friends, including the Pelzner family, Charles, Karen, Marilyn, Bill and his niece Robin.

Byron was an accomplished American Abstract Expressionist painter and printmaker. He is well known for his prints, which range from lithographs to dry point etchings and mezzotints. His work was included in the Museum of Modern Art’s 1954 survey entitled “American prints of the 20th century” at which time he was credited with helping to bring color lithography in America to a par with work being done in Europe. His work is in the collections of the Whitney Museum of American Art, the Museum of Modern Art and the Library of Congress. He has an extensive collection at the Annex Gallery in San Francisco.

Byron continued to create beautiful impressions of the Oregon landscape when he moved to Oregon from San Francisco in 1997.

He will be remembered by his loved ones as a man of many talents and interests, riveting and amusing stories and a wicked sense of humor. He enjoyed a full life of duck hunting with his beloved Springer spaniels, fly fishing, and of course his incredible artistry. His hobbies were all intermingled with his love of the outdoors.