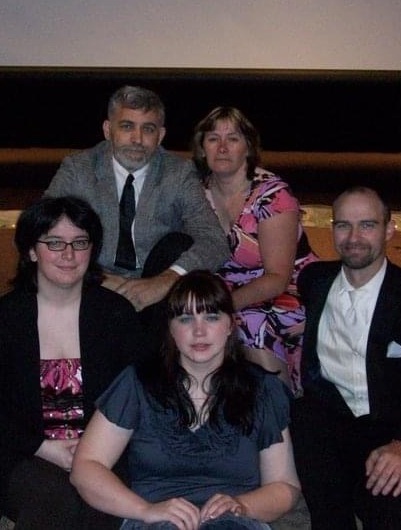 On July 27th, 2022 Tyler Ferrando passed away at home with his wife, Renee, by his side.
Tyler was born in San Francisco, California on March 21st, 1962 to Tom and LoAnn Ferrando. After the family packed up and moved to Oregon in 1968, Tyler met the love of his life, Renee, in 1978. At the ages of 17 and 18, they would marry on May 24th, 1980 in Reno, Nevada and begin a 42 year long love story.
During their time together they had three children, Zac, Tiffany, and Megan. Tyler created endless memories with his family and friends.
Tyler’s heart filled with even more love with the birth of his grandchildren. Madi, Emily, & Hudson, as well as his honorary grandchildren, Alyson and Charlotte, filled his life with joy and he was so proud to be their Papa.
Tyler worked as a plumber and spent his career working with his father, brothers, and son, including owning his own plumbing company with his wife before retiring.
Tyler could also be found at the race track racing his number 44 car in Pro 4 West Racing Association competing against not only friends and fellow racers, but also his many family members who also raced. Tyler sporting the number V0 was also a frequent competitor in Demolition Derbies with his family across the west coast and in Canada, making friends and some not friends.
Tyler leaves behind his beloved wife, Renee (Donahoo), his children and honorary children Zac, Kaitlin, Tiffany, Jen, Megan, and Melissa, his grandchildren, Madi, Emily, Hudson, Alyson, and Charlotte. He also leaves behind his mother, LoAnn, his sisters Denise and Traci, and 5 brothers: Tim, Co, Tully, Tobey, and Terry, as well as numerous nieces and nephews, extended family and friends.
With his passing Tyler joins his father, Papa Tom, who he endlessly missed.
No services have been decided on, but the family is planning a Celebration of Life to be held sometime in the future.
CAUTION: This email originated from outside of the organization. Do not click links or open attachments unless you recognize the sender and know the content is safe.