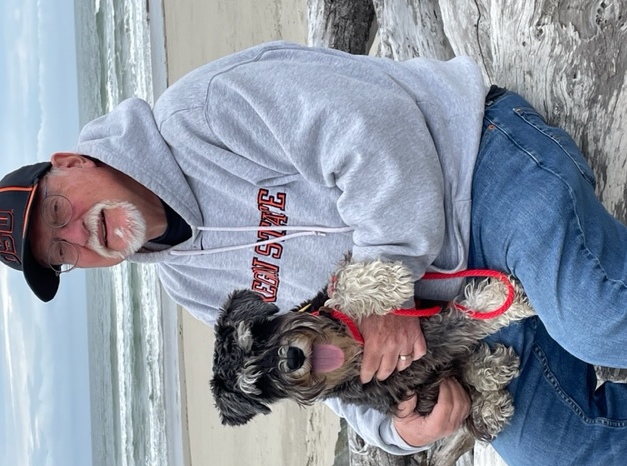 Gary was welcomed into this world in 1952 by his parents, Dean and Mary Gipson, and his older sister Karen.  He was born in Casper, Wyoming.  His younger brother Rod joined the family two years later.  Following the opportunities of the budding electronics industry, the family relocated to Oregon in 1958.

During his youth in Hillsboro, Gary grew up surrounded by extended family and loved ones.  Family camping trips were a highlight for all.  Gary would ride his bike all over town, and enjoyed participating in football and wrestling.  At an early age, Gary became a voracious reader, and classic sci-fi novels, like the Red Planet, were his favorites.  During his summers, Gary picked strawberries and a variety of other crops.  In those days, Gary especially loved playing baritone in the Hillsboro High School marching band and achieved First Chair.  He was active in DeMolay, serving as Master Councilor in 1969.  As a child, Gary loved teasing his siblings, a habit he continued throughout his life with almost everyone he met.

In the spring of 1970, Gary met Kay Kalsch at a high school dance in Beaverton.  Her parents owned a dairy farm south of Hillsboro.  Gary liked to spend time on the farm, running equipment, teasing her siblings, and even milking cows.  Gary and Kay married in 1973.  Their daughter, Rebeka, decided to make her entrance on their fourth wedding anniversary.

As a young man, Gary worked in a variety of professions—building mobile homes, managing a milk products store, selling real estate, building cabinets for pipe organs, and more.  He started college a few times and it finally stuck on his third try.  He earned his bachelor’s degree in Business in 1986 and was named outstanding student in his personnel concentration.

Upon graduation, Gary embarked on his 30-year career with the Oregon Employment Department.  As he worked through the ranks, he held a variety of roles in field offices ending up as an office manager in Tillamook.  From there, he was recruited to become an IT manager in the Salem central office in 2000.  He loved the challenges of this position and the camaraderie of his team.  He helped build Quality-Info.org, a nationally recognized website, the first of its kind—used by industry leaders, job seekers and legislators in need of labor market information.

In his personal life, Gary loved learning about EVERYTHING.  Some of his favorite interests were space travel, astronomy, airplanes, cars and politics.  He also found his spiritual home in New Thought.  As many know, he was often vocal in his opinions.  Gary has long been an OSU Beaver fan—having held both football and baseball season tickets.  The Gipsons enjoyed traveling whenever they could—Gary thoroughly enjoyed a good road trip, especially on the roads less taken.  He always said that “you can never go home the same way you came,” a tradition passed down to him by his parents.

Fall was a season to be celebrated by Gary—he always anticipated and thoroughly enjoyed hunting trips with his buddies, even when they didn’t bring home an elk.

Gary also loved seaside activities.  He and Kay purchased the Kalsch cabin in Manzanita in 2005, and they spent many years there in their free time, enjoying the ocean, crabbing, clamming and making memories with family and loved ones.

Since his retirement in 2017, Gary loved keeping up with his friends on facebook, traveling, and following his favorite sport teams (the 49ers and Guardians).  In 2021, Gary and Kay were able to realize a 20+ year dream, and spent three extraordinary months in Hawaii.  For the past several years, the Gipsons have been seeking the sun in the southwest during winter.  In 2022, Gary and Kay purchased a park model home in Arizona.  While there, Gary especially loved playing bocce ball and exploring the desert.

Over the years, the Gipson family has grown to include son-in-law, Jay, and two grandchildren, Gavin and Willow.  Gary loved his family with a passion, and as expected, he continued the teasing tradition.  Anyone who knew Gary experienced his mischievous personality and wry sense of humor.  He often gave folks pet names.  His grandchildren were most commonly known as “The Gavinator” and “Willowkins.”

Throughout his life, Gary garnered many amazing friends.  He loved fiercely and was loved in return!

Donations can be made to: