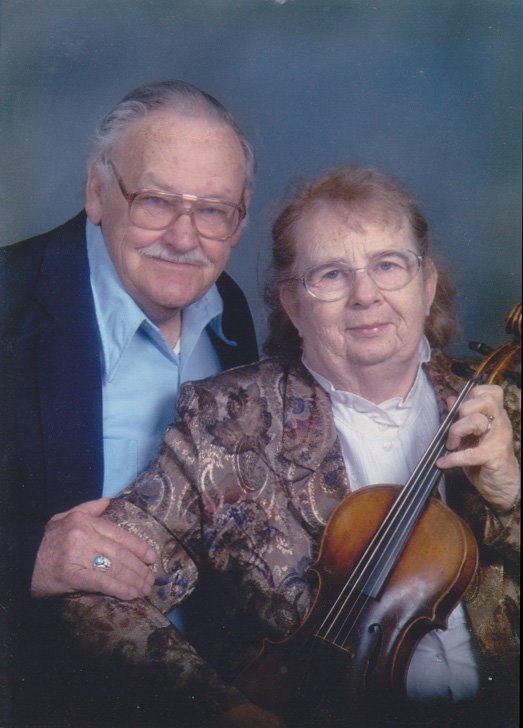 A widow for 12 years, Joyce is preceded in death by her husband of 54 years, James Benjamin Waters, both her parents, and two sisters, and her long time friend, Alexis D. Greshom (aka Mary ‘Joyce’ Poole). Her firstborn son was lost to adoption, in 1952.

Joyce spent much of her childhood in Pennsylvania. Relocating as a teen, she earned her Registered Nurse credential in 1953, in St. Petersburg, Florida. She traveled to New Mexico as a Missionary Nurse, to support the indigenous populations in the Northern New Mexico High Desert.

Her family moved to Alamosa, Colorado in the late 1960s, so Joyce could study at Adams State College, now University. A lifelong, classically trained violinist, she earned a Bachelor of Fine Arts with Honors in Music and Music Education, Class of 1976. Joyce shared her passion with the violin teaching students from all sectors, while simultaneously raising her four children and working within multiple health care settings/facilities.

Joyce was the proud owner of an antique violin, purchased more than 50 years ago in a magical antique dealer’s home in Santa Fe, New Mexico. With this cherished companion, she traveled Europe with the Pueblo Symphony of Pueblo, Colorado in the late 1970s.  The experience of playing in 900 year old abbey chapels and cathedrals in Austria and Germany was a transformative one in her life. She played that violin in the Adams State College Orchestra, as a student there, and in Community Orchestras where ever she lived until eye disease robbed her of her ability to see the sheet music.

A move to the Pacific Northwest in 1981 brought her to a new musical region. She continued nursing and in her 50’s moved to what is now known as the Wine Country in Yamhill County, Oregon. She joined the staff at Friendsview Retirement Community in Newberg, Oregon, and was active in the George Fox University Community Orchestra.  Her crowning achievement before her retirement from healthcare was to consult on and implement the first computerized medical records system created for Friendsview Retirement Community, in a project designed collaboratively with the Computer Science Department of George Fox University of Newberg, Oregon.

She retired to Dayton, Oregon in 1993. Her passion for reading, and gardening, and music kept her mind sharp, and her hands dirty.

Joyce and her husband moved to Oregon City, Oregon in 2006, where she lived until early 2020. She passed away in Milwaukie, Oregon on Mother’ Day, May 10, 2020.  She was loved and will be deeply missed.

Share Your Memory of
Joyce
Upload Your Memory View All Memories
Be the first to upload a memory!
Share A Memory
Plant a Tree