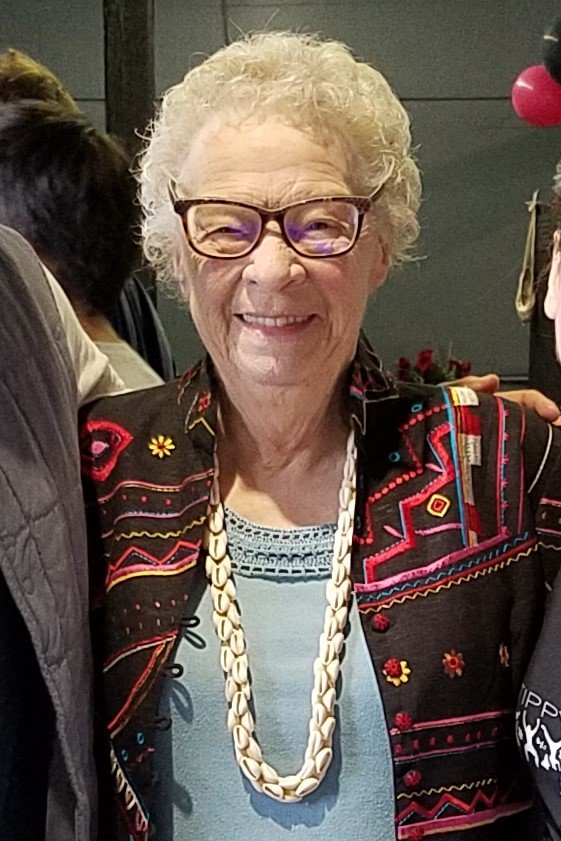 TEA - Roxana (Rox, Roxie) Lea TEA (nee Miller) (BLANCHARD HALL LEWIS SNYDER STURM THOMSON/THOMPSON), of Sherwood, Oregon, died at her residence at the age of 86 of natural causes related to a terminal heart condition in the early morning hours on May 22, 2021.

“Unable are the Loved to die, for Love is Immortality…” – Emily Dickinson

Her father, Lellyn was a salesman, owner/operator of Blanchard Tire Company in East Portland with his brother, Gene, worked at Thompson Aircraft Tire Corp. in San Francisco, and served in the U. S. Navy Seabee’s Construction Battalion during WWII as a maintenance mechanic. [*Lellyn served in active duty at the same time as his only son, Roxana’s brother, Robert (Bob), who was also in the Navy]. Her mother Laura, a seamstress, was a longtime bookkeeper who worked for Munnell & Sherrill, a supplier of fire department equipment, and at the Portland shipyards as part of the war effort. [Roxana’s elder sister, Arlene, was concurrently in Los Angeles and involved in the Spruce Goose project].

As a toddler in the 1930s, Roxana lived in a log cabin in old Sherwood. She had fond memories of playing around the water pump, a pet Rhode Island red chicken, listening to the ‘Sons of the Pioneers’ on a floor model Philco radio and making breakfast on a cast iron stove with Bob. Her elementary years spent at Buckman, Creston, Fernwood and Hosford have her living throughout the greater Portland area at times with foster families due to circumstances of the War. Roxana enjoyed reading, Girl Scouts, sewing, horseback riding, roller skating, softball, music, dancing and riding the trolley cars. After her parents’ divorce in 1942, she began earning wages to help the family, securing employment at 14, with her mother at M&S, and a summer job at the Diamond D Dude Ranch in East Multnomah County. Her favorite horse, Leo, was a big Appaloosa who stepped on her foot if she did not produce an apple quick enough. Roxie took her first flight in an open cockpit airplane in 1938 on an exhibition around Sauvie Island and in 1948 flew from Portland to Williamsport, Pennsylvania; a flight that took 27-1/2 hours. She would recall those two events all her life and felt they influenced her view of the world substantially.

Roxana attended Girls Polytechnic High School (later Washington-Monroe). In 1950, at age 16, her Junior year, she was “asked to leave because I was pregnant”. She married the father, Jack Miller, her adolescent crush and Buckman classmate, in March 1952. A daughter, Dianna Lea, was born in June. An adoption plan was made for a second child, a son, born in July 1952, when Roxana and Jack divorced. [*In 2010 Roxie and family were happily reunited with Tommy Allen Sundin - the spitting image of his maternal Grandfather].

As a teenage single mother, Rox entered the professional workforce as a file clerk managing blueprints at Freeman, Hayslip, Tuft & Hewlett, an architectural firm located where I-405 now runs through downtown. [The firm designed numerous public schools including South Salem High School which won numerous awards and was considered state of the art in the 1950s]. Moving to San Francisco to be near her father, Roxana took a secretarial job where her dad worked at Thompson Tire. There she met and married Lindley Garth Tea in March 1957. Tea, as he was referred to, 15 years her senior and a veteran of WWII, was born in Fairview, Oklahoma (1919) though raised primarily in southern California in the Riverside/San Bernadino areas and worked as a laborer at the plant. Together they had a son, Raymond Lewis, in February 1958, while living in Lodi. Relocating back to Portland, Tea went to work for Goodyear Tire; another daughter, Jaymalea, was born in June 1961. Roxana’s youngest child, Laura Jane, came along late December back in 1963 where the family resided on Winchell St in North Portland until 1979. [The house, purchased in 1963 for $12,500, sold in 1979 @ $45,000 and is currently on Zillow - est. @ $660,000+].

Living in the Kenton neighborhood, Roxana worked as a stay-at-home mom while the children went to Kenton Elementary (now De La Salle North Catholic High School). The family enjoyed trips to southern CA visiting Tea’s family, Disneyland; cross country drives to Yellowstone; the old Hall family farm (the Lazy Bell Ranch) and original 1903 homestead (still standing) near Bushnell/Kimball, Nebraska; Albin, Wyoming and Fairview/Enid, Oklahoma [Once for the children’s great-great Grandfather’s 100th birthday]. As a couple, Tea coached, and Roxie kept score while managing the snack wagon for the Kenton Little League baseball team sponsored by the local Little Chapel of the Chimes. Favorite stories are told of word games, reading the dictionary at the dinner table, spoonerisms, watching the Moon landing live on TV, going up in the Goodyear blimp, parking along Marine Drive to watch the planes fly in and out before the local airport became international. Stories of swimming at Columbia Park pool, amusements and bowling at Jantzen Beach, watermelons from Sauvie Island, picnics at Laurelhurst and Blue Lake parks and winning a Christmas holiday lighting contest in 1972 became family lore. Roxie shared an amazing appreciation of music for a wide variety of genres that she instilled with the children. Family sing-a-longs and dancing around the dining room listening on the old Magnavox to Mitch Miller, Roger Miller, Glenn Miller, and other greats was the daily norm. [An incredible vinyl collection of 33, 45, and 78 records still exist that includes classical, jazz, symphony, soundtracks, contemporary and Christmas albums]. Roxana was a 2nd generation, expert seamstress and made most all the children’s clothes as well as square dance costumes; she and Tea both prolific dancers in the ‘Bows & Arrows’ club. An advanced knitter and crotchetier all her life, Roxie made many fine quilts, doilies, cozies, scarves, and sweaters over the decades; her last finished piece for her great-great Granddaughter, Aniyah, was stitched in 2019.

In the late 1960s Rox entered back into the workforce, employed for over a decade as Executive Secretary for Lonie Company, owned by Portlander, Don Lonie. [Lonie was in public relations for the timber industry and gave testimony at the Hearings, Reports and Prints to the Senate Committee on Agriculture and Forestry in 1969 culminating in the National Timber Supply Act]. She and Tea divorced in 1972. Dianna, Jaymalea and Laura Jane all attended Jefferson High School. Raymond attended Benson Polytechnic (the sibling school to the old Girls Poly) before going on to a naval career as well. [Raymond became a veteran of the Gulf War, serving in Operation Desert Storm]. Laura graduated in Canby after Roxana moved the family to Wilsonville in a house she co-built with her brother and mother in the planned community of Charbonneau.

Roxana’s work history went on to include employment at AMF Voit, Lawyer’s Title, Oregon Title and Albertsons Grocery.  During the 1980s she traveled abroad extensively with family, visiting Hong Kong, Taiwan, Australia, Fiji, New Zealand, Finland and various cities in the former Soviet Union, which she enjoyed immensely. As a born and bred Oregonian she was a big fan and strong supporter of OPB (Oregon Public Broadcasting). She loved big band music, mystery novels, macaroni and cheese, watching the Portland Trailblazers, Chicago Cubs, Seattle Mariners, backyard gardening, family gatherings, numerous beloved cat companions, cat memes and Sunday drives to hear and there. Having never finished high school she was highly respected as a self-taught woman who could converse on a wide variety of topics, especially World history and archaeology. She also had an incredible memory for facts and trivia. She appreciated knowledge and the sharing of it more than all else and loved to have in-depth conversations with close friends and total strangers alike. To her, everyone was considered family; as she would often say, ‘We’re all related in one way or another.”

In 1989 she came full circle in life, moving with her ‘Brother Bob’ back to Sherwood living in Smith Farm Estates where she resided until her passing. During this period with a life-long love of history, archaeology, and family tales, Roxana invested in the family’s 1st home computer and began to study genealogy, becoming a certified member of the Genealogical Forum of Oregon. She embraced email, the internet, and later, cable television and Smartphones. With the help of technology, she documented over 5,770 names in her family tree, dating back to the 15th century. She was most proud of her ancestral great-great Grandfather, Stephen B. Neal (of Indiana), understood to be one of the drafters of the 14th Amendment. There are tales of immigration from Scotland/Ireland, a Native American princess, Van Tassel’s of 17th century New Amsterdam - purported to be the inspiration for Washington Irving’s ‘The Legend of Sleepy Hollow’, Mary Todd, Abraham Lincoln and Daniel Boone connections, the great Civil War, breaking horses for the Army’s U.S. Calvary, Homestead Act land grants, oil rights, Minutemen missile sites, and Oregon Trail pioneers just to name a few. Her passion for research, documentation and bonafide citations are a testament to her ancestry, her family, and her life. The legacy library and heritage memorabilia she amassed will be treasured by her descendants for generations to come.

Roxana battled type 2 diabetes and Rheumatoid arthritis. In 2013 she was diagnosed with an aortic aneurysm tied to an inoperable, terminal, leaking aortic value that precipitated a steady decline in her condition. In her last weeks on Hospice at home she enjoyed visiting with close friends, near neighbors and her family as well as the comfort of family pets.

She was preceded in death by her parents, (Lellyn and Laura), her sister and brother-in-law, (Arlene Rose (Gordon) Brown), her brother, (Robert Lewis) and her son, (Raymond Lewis).

In remembrance of Roxana, her family will honor her at a private reception following a memorial with full honors for Raymond at Willamette National Cemetery in July. A granite tile will be installed for her alongside her paternal grandmother, Blanche ‘Nana’ Edna Lewis, in the Garden of Reflection at Riverview Cemetery in Portland.

In lieu of cards or flowers, donations can be made in her memory to the Genealogical Forum of Oregon (www.GFO.org).

An exceptional woman and much loved daughter, sister, aunt, mother, grandmother and friend - may she rest in eternal peace in the embrace of her beloved ancestors.

“Take me again to your heart as of yore;

Kiss from my forehead the furrows of care,

Smooth the few silver threads out of my hair;

Over my slumbers your loving watch keep…”

Share Your Memory of
Roxana
Upload Your Memory View All Memories
Be the first to upload a memory!
Share A Memory
Send Flowers