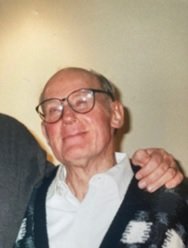 Arvid Wallace Johnson, 91, of Beaverton, OR, died peacefully at home with his wife and family by his side on June 10th, 2021.  He was born in Mora, Minnesota on July 29th, 1929, the second of 4 children, born to his beloved mother Helen who proceeded him in death as well as his siblings Dorothy, Duane, and Geraldine.
Arvid grew up in Mora & graduated from Mora High School in 1947. Upon graduation, Arvid served in the Army during the Korean War.  During his time in the service, he married his high school sweetheart Bonita Rae Simmons.
Following the war Arvid joined General Electric, as an instrumentation technician, eventually being promoted to a Sales Engineer.  His time with GE moved him and the family from NY to California and Oregon.
Arvid & “Bonnie” had two sons Bruce (Cheryl) and James (Lori), 6 grandchildren, and 7 great-grandchildren. Arvid was always interested in all his kids/grandkids/great-grandkids activities offering words of encouragement and support.  Arvid and Bonnie separated in 1979.
Arvid met and married his second wife Coleen “Neecol” in June 1983.  Between them, they have 6 kids, 11 grandkids, 14 great-grandkids.
Arvid loved spending time with his expanded family. He and “Neecol” spent much of their time traveling to Lake Tahoe, Minnesota, and Utah.  When they were not traveling, they spent much of their time supporting Neecol’ s career as an artist, always holding painting classes at local craft stores and building up to their annual booth at the Christmas Fair held each at the Portland Expo Center.
Arvid finished his career at Marathon LeTourneau working in the Electric Repair shop.  He and his colleges continuously strategized on how to optimize their respective 401K accounts by shifting their funds to the hot stock of the day! He retired in 2006.
Arvid had an incredible demeanor, he was the most positive, glass-half-full, unselfish person you would ever meet.  His endless “dad” jokes, inspirational attitude, and Minnesota influence will surely be missed.  He was a great husband, father, grandfather, man………………… we so look forward to seeing him again!
A Memorial Service will be held July 29th @ 1:30 pm at Willamette National Cemetery in SE Portland.

Share Your Memory of
Arvid
Upload Your Memory View All Memories
Be the first to upload a memory!