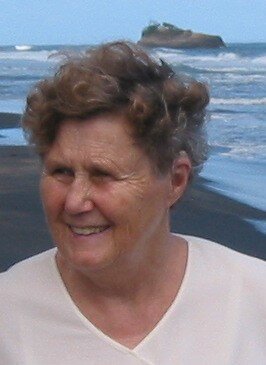 Asta was born at home on December 06, 1928 to Syster Eulalia and Erik Hjalmar Ullén in Northern Sweden, in Dorotea, Västerbotten, Lapland, at a time when modern life seemed to have stopped in the 19th century. As one of four children, and with 64 first cousins, Asta was related to almost everyone in the village where her family had lived for hundreds of years.

Asta’s Swedish heritage was an important part of her identity. Although she became an American citizen in 1988, she got her Swedish citizenship back in 2017 after it became possible to have dual US-Swedish citizenship. Over the years, Asta enjoyed sharing her Swedish culture, foods, and traditions with her family and friends. A skilled cook, Asta especially took pride in preparing extravagant Christmas smörgåsbords (“julbord”) that included Swedish delicacies such as potato sausage that she made every year with close friends in Tacoma, Washington.

She often said that one of the formative events in her life was coming down with scarlet fever when she was just 5 years old. Because there was no hospital in Dorotea, she had to spend 6 weeks alone in Umeå, which was the largest city in the region that had a hospital that could treat her. Asta did not see her family during her recovery, although she was grateful that a cousin who worked at the hospital stopped by a few times to check on her. She never forgot how homesick and alone she felt then.

Perhaps that early experience of fending for herself at a young age helped Asta become independent enough that, by the age of 16, she left home with the goal of eventually becoming a nurse, which was one of the few occupations available to young Swedish women at the time. She spent 6 months working as an au pair for a pastor's family in Stockholm and then attended a folk school for 6 months where she learned how to cook, weave, and take care of a home.

After a couple of years in Stockholm, Asta went back to Dorotea where she worked at the infirmary until she turned 19 years old in 1948 and could start nursing school. Asta graduated from nursing school in Stockholm in 1951 and then went to work as a surgical nurse at Karolinska Sjukhuset, the famous medical center.

Another important turning point in Asta’s life happened in 1954, when she went on a nursing exchange program to the USA with her best friend. Asta and her friend worked as nurses at Massachusetts General Hospital in Boston for 6 months, and then Asta went to Denver General hospital in Colorado for another 6 months. While she was in Denver, Asta met a charismatic young American medical student named Ralph Leon Marx Jr., who proposed to her when she went back to Sweden in 1955 to work at Karolinska. Asta then returned to Denver a year later and married Ralph on March 17, 1957.

When Ralph graduated with a medical degree from the University of Colorado Denver in 1958, the young couple moved to Ft. Bragg, North Carolina where Ralph started practicing medicine with the US Army. In 1958, their first child, Ralph Leon III was born, and then Richard Lee came along in 1959. Their first daughter, Kaarin Heléne, followed in 1963. During those years, the family had many life-enriching adventures as Asta’s husband was transferred to different hospitals in the Army. The family lived in Honolulu, Hawaii from 1959 to 1963; and in Orléans, France from 1963 to 1966. Finally, the family moved to Tacoma where Ralph worked as an orthopedic surgeon at Madigan Hospital until 1967, when he started private practice in Lakewood, and Kristina Eva was born.

Because the family was always very active, Asta was the chief organizer when they went on outdoor adventures, such as ski vacations every Christmas, and sailing vacations in the Salish Sea every summer. She was also head cook for the crews that sailed the family’s sailboat, Akka, in races around the region; Akka’s crew was always the best fed in the races and the lure of great food was helpful for recruiting crew members.

When Asta and Ralph divorced in January, 1980, Asta continued raising her children as a single mother. Asta lived in Lakewood for 40 plus years and was fortunate to have several steadfast and close friends in the local Scandinavian community and at Pacific Lutheran University (PLU).

Asta enjoyed many interests, including travel and being outdoors. Like many Swedes, she enjoyed downhill and cross country skiing, hiking, and running. In the summer of 1978, at age 50, she summited Mt. Rainier, a 14,411 foot peak in the Cascade Range of Washington State. In addition, Asta gave her time and energy for many years volunteering for the Scandinavian Cultural Center at PLU, including working at the thrift shop that funded the center. She enjoyed participating in Scandinavian groups in the Tacoma-Seattle area and represented her country well. She did crafts such as sewing, knitting, and needlepoint, and made traditional Swedish rya rugs. She sewed Halloween costumes and stuffed animals for her children, and one of her major sewing achievements was making a huge sailboat cover for Akka.

As for her unusual name, Asta joked that she never met anyone else with her name because it’s usually a dog’s name. She would tell the story of a rather formal dinner while visiting acquaintances when touring Germany as a young woman–one of the family’s young sons broke the silence at the table by quipping, “Asta is a strange name. Only German Shepherds are named Asta.” Of course, the boy’s parents were horrified, but Asta thought it was very funny. She was especially delighted when one of her grand-daughters found a reference to a girl named Asta in a word problem in her 7th grade math text book last year.

After selling her home in Lakewood, Washington in 2007, Asta lived in University Place, Washington, and then moved to Knoxville, Tennessee to live with her youngest daughter, Kristina, and her family. In 2013, she moved to Willamette View Continuing Care in Portland, Oregon, where she was part of a community of people who loved and appreciated her.

In keeping with her Swedish heritage, Asta was a modest and caring woman who was happy not to be the center of attention. She will always be remembered for her kindhearted warmth and generosity. She thought of everyone else before herself, and used her tremendous energy and strong organizational skills to quietly make things happen. As one of her closest friends said, “Asta was a TRUE gift to everyone who had her in their life.” Asta was the rock for her four children and could always be counted on to give good advice (and of course, she was always right!). We miss her presence in our lives so very much.

Donations in Asta's name can be made to the Scandinavian Cultural Center at PLU.

Share Your Memory of
Asta
Upload Your Memory View All Memories
Be the first to upload a memory!
Share A Memory