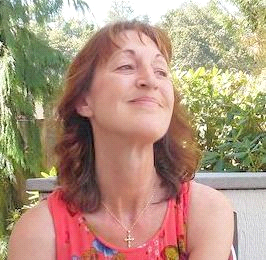 Susie was born in Eugene, Oregon, to Donald Anthony and Mae Eloise (Douglas) Montgomery. Her first 10 years were on a farm south of Harrisburg where her father was the foreman. When Daddy died suddenly in 1965, Susie, her older sister, Marilyn, and their mom moved into Harrisburg.

After completing high school at Lane Community College, Susie married Steven Russell Scott of Roseburg. They began married life in the army, living in Stuttgart, then Wiesbaden, Germany, where Steve was stationed in the U.S. Army. Their daughter, Angela, was born in Bad Konstadt, in an Army hospital. The family lived in Kentucky, Georgia and Texas during Steve’s Army years. Susie and Steve divorced but remained lifelong friends.

Susie returned to Oregon when Angela was a toddler. Susie pursued a career in health care, working as a certified cardiovascular technician at Sacred Heart General Hospital, Eugene, and later, as a phlebotomist in Salem.

In 1991, Susie got reacquainted with Kerry Dean Williams, one of her sister’s college friends who often visited Mae. Susie and Kerry were married in Salem on Friday, December 13, 1991.

Susie’s health challenged much of her adult life. Despite it all, she never missed a birthday or major holiday, making sure her daughter and grandchildren had Easter baskets every year. It wouldn’t be Christmas without her pumpkin bread. No special occasion was required for a batch of her incomparable chocolate chip/peanut butter/coconut cookies. She gave gifts to everyone. She never knew a stranger.

Susie’s mom Mae Montgomery Aune, died in December 2020. Others who preceded her in death include her step-siblings, Fran Aune Heckart and Merle “Buster” Aune; beloved grandparents Jerry and Elmer Bryant and great-grandmother Mabel Hoel; 12 Montgomery and Douglas aunts and uncles; her Suffolk ewe, Blossom; and cats Arthur, Frodo, and Pippin.

Later, on a June Saturday, we will have a memorial gathering at the Harrisburg Museum Pavilion" in Susie's honor

Share Your Memory of
Susie
Upload Your Memory View All Memories
Be the first to upload a memory!
Share A Memory