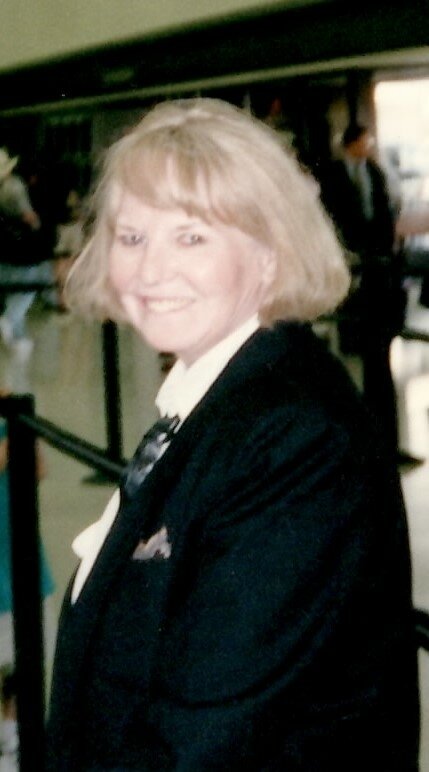 On Wednesday February 16th, 2022, 9:00am, Elizabeth “Lily” (Bryne) Lore took her last breath on this earth surrounded by loved ones.

Elizabeth Christina Byrne was born December 18th, 1932, in Dublin, Ireland to Charlotte Bowes and James Byrne, one of the youngest of nine children. Elizabeth always had a close bond with her brothers especially Jimmy, Timmy, Tommy and Fran and sister Anne. She also dearly loved her mom, Charlotte.

As a young woman, she moved to London and worked as a waitress in a popular restaurant. Elizabeth was a beauty, and she caught the eye of many admirers, but her heart went unclaimed until the day she met the love of her life, Air Force Sergeant George Harold Lore. George often said from the moment he saw her that she was the girl he was going to marry. The two fell in love and spent 64 years together.

George was transferred to Texas and the two began a family. Their daughter Kym was born in 1959, followed by their son, Scott in 1961 and youngest son Gary in 1964. As a mother, Elizabeth was devoted to her three children and spent all the time caring for them while providing a wonderful home for her family.

The family would call home to various places in Europe and the US, even stationed in Athens Greece before George finally retired and brought the family to settle in Myrtle Creek, Oregon.

As the years passed, they became grandparents to six grandchildren, Kiley, Armando Jr, Veronica, Amanda, Mariah, and Mykel. Elizabeth reveled in spending time with her grandchildren often making jokes, running around the yard playing games, playing salon makeover, going to the county fair, reading bedtime stories which earned her the nickname “Grandma Book-a-read” and most precious stories of her life in Ireland. She would often sing old songs her mother had sang to her. She was also blessed to have four beautiful great-grandchildren, Merari, Ezra, Daryen, and Analicia.

In the 1990’s, Elizabeth “Lily” was given the opportunity to return to Ireland and appear on a television program to be reunited with two of her brothers. The reunion was a favorite memory and one that she would often refer to when talking about her life.

In her final years, Elizabeth and George moved to live with her daughter and son-in-law Armando that cared for both. They were happy to be closer to their youngest son Gary and be able to see the grandchildren.

Elizabeth’s sense of humor, elegance and loving heart made all those she met fall instantly in love with her. To know Elizabeth was to bask in the warmth and beauty of the world. Small in stature and giant in heart, those that knew her can still hear her singing Irish lullabies and laughing the sweetest laugh. She always took pride in her appearance and was a wonderful cook.

As the last living child of Charlotte and James, she was preceded in death by her parents, brothers, and sisters. Lily is survived by her beloved husband George, her three children Scott Lore of San Marcos Texas, Gary Lore on Portland, Oregon, Kym and devoted son-in-law Armando Amador of Beaverton, Oregon as well as her grandchildren and great-grandchildren. She fondly remembered her nephews Michael O’Keeffe, Martin Byrne, Marty Lore and nieces Lucy Byrne, Carrie Byrne, and Shannon Lore.

Share Your Memory of
Elizabeth
Upload Your Memory View All Memories
Be the first to upload a memory!
Share A Memory
Send Flowers