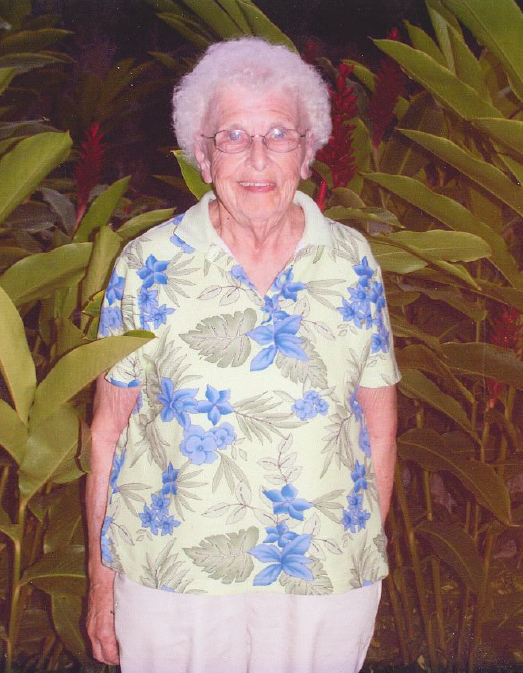 On May 9, 1931, Roy and Edith Kuns welcomed a baby girl into their home in Lindsey, California. Karene Adele Kuns joined her big brother Delmer, to make a family of four. Later Marcelynn (Marcy) would complete the family of five.

The Kuns family moved to the farm in Woodburn, Oregon where they grew daffodils. Karene graduated from Woodburn High School in 1949. She attended Oregon State University for one year and three years at Good Samaritan Nursing School where she graduated as a Registered Nurse. Upon completion, she worked at the Silverton Hospital as a surgical nurse. Then at a hospital in Honolulu, Hawaii. That was followed by work at the Oregon State Tuberculosis Hospital. In 1973 the Meridian Park Hospital opened, and she was there from the beginning. She worked there until she retired, in 1983.

Her life was not limited to family and the nursing profession. She volunteered for the Barry Goldwater campaign and was honored with a roadrunner broach which she proudly wore for many years. She continued with her conservative political interests throughout her life.

She was an avid sports fan, especially college football, basketball and Nascar. She liked to read, do puzzles, quilt, and do hand embroidery. She always seemed to be keeping her hands busy with projects.

There is a delicious side to her life as well. She loved to bake! In 1983 she opened a bakery in Lake Oswego, K’s Dough Factory. She and her cousin Loicene made cakes, pies, cookies, pastries by the dozens to the delight of all, many times to exhaustion!! After a few years, she and Lonnie closed the business and moved to Long Beach, Washington to be closer to her sister Marcy where they purchased a cookie shop. When they grew weary of running a retail business, they began to produce and sell her mouthwatering hazelnut toffee at craft shows with their company Sugar n’ Spice around the Pacific Northwest as well as mail order.

Many people have experienced her cookies, cakes, pies and candies, rolls of all kinds. Family members, coworkers and friends were treated on many occasions with something delectable from her kitchen.

After a time, she began to volunteer at Meridian Park Hospital. She was much appreciated for her efforts as she brought comfort to those in need and reconnected with many of her previous coworkers.

Karene lost her husband Lonnie in 2003 after being her faithful companion for 47 years.

Later some health issues began to arrive, with three hip surgeries, and various other challenges. It seemed best, in 2019, that she no longer live alone, so she moved to St. Helens where she lived with her sister Marcy Salisbury and her brother in law, Bob. In 2021 the three of them experienced a home fire, where they all lost most of their possessions. It was Karene who woke and alerted Bob and Marcy to evacuate. She helped give input to the rebuilding of their home.

Throughout her life she was affiliated with the Church of God, most recently Sunset Park Church was her church home.

She passed away peacefully on May 26, 2022, in Tigard, Oregon. She is preceded in death by her husband Lonnie, her brother Delmer and her niece Lori.

She is survived by a sister Marcelynn Salisbury.

A son Don Esau and wife Kris of Vancouver, Washington.

Share Your Memory of
Karene
Upload Your Memory View All Memories
Be the first to upload a memory!
Share A Memory