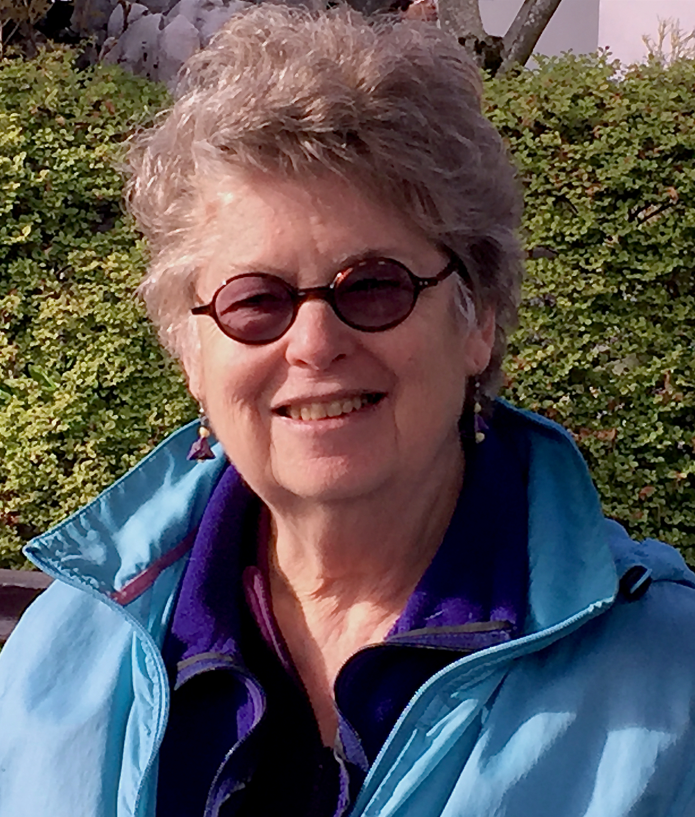 Carolyn Reznikoff, eldest daughter of Ruth and Simon Reznikoff, was born in St. Louis, MO, and moved with her parents and two younger sisters, June and Laura, to San Diego, CA when she was eight years old. She graduated from Crawford High and Pitzer College. After undergraduate school, and inspired by her aunt Maxine, Carolyn decided to become a social worker, earning her MSW at San Diego State. While there she started one of the nation’s first shelters for homeless youth, which is still in existence. After graduate school she followed her sister June to Portland OR, where she lived ever since, and where she and June enjoyed an especially close relationship. In 1979 Carolyn married David Porter, with whom she lived a challenging and deeply satisfying life for 43 years. They had one daughter, Sasha Porter, who lives in Olympia, WA with her partner Pyxie Starr, a rescue dog, and a flock of ducks.

Carolyn had found her calling as a social worker in hospitals, home health, and hospice for over 30 years. She found working in hospice particularly rewarding. She supported the dying and their loved ones in making the transition from life to death, and from this experience she developed skills and understanding which were to serve her well in her own dying process.

After retiring from social work, Carolyn became a master basket weaver, learning and practicing traditional Native American basket-making techniques, including the gathering and preparing of natural materials. Her work was complex, technically accomplished, and stunningly beautiful, inspiring many in the tight-knit basket weaving community she joined.

Carolyn was brilliant, moody, joyful, opinionated, and fun. She was adored by her friends and her younger cousins, who found in her a kind, supportive, understanding presence. She could see the beauty in everyday life and wanted to share it with everyone else. She knew how to laugh, she knew how to cry, and she knew how to love.

Carolyn had health problems that began early in life when, as an infant, she lost a kidney due to kidney disease. By the time she was in her fifties, she had more health issues than any one person should have to bear. And yet, throughout her long and complex health odyssey, Carolyn sought and found the joy in life. Not satisfied with the superficial, she employed different means (including co-counseling, meditation, self-help, and the relationships with her husband and daughter) to understand herself, grow emotionally, and develop the equanimity that allowed her to thrive despite her illnesses.

This equanimity helped her to be clear-headed and deliberate in recognizing when her joy no longer outweighed her suffering. After more than two difficult years on dialysis, Carolyn saw that her suffering had grown unbearable, and she decided to stop and die on her own terms. For two weeks after she stopped dialysis, and before she started to feel the effects of its absence, Carolyn enjoyed life to the fullest. She visited with friends and family, ate with abandon the delicious treats they brought, laughed a lot, and basked in the love that surrounded her. She said, “If I’d known dying was going to be this much fun, I would have tried it a lot earlier!” Twenty-four days after stopping dialysis (and then contracting Covid!), Carolyn died, held in loving care by her husband David and daughter Sasha, and well supported by Kaiser Hospice.

Carolyn is predeceased by her parents, Ruth and Simon Reznikoff, and by her aunt, Maxine Shear. She is survived by her husband David Porter and daughter Sasha Porter (Pyxie Starr), her sisters June Reznikoff (David Simon) and Laura Olson (Steve Olson), nieces Erika Zarco (Travis Higginson), and Charlotte Simon, and cousins Claudia Bernard (Howard Herman) and Nancy Bernard.  A memorial service will be held in August.

Share Your Memory of
Carolyn
Upload Your Memory View All Memories
Be the first to upload a memory!
Share A Memory
Send Flowers