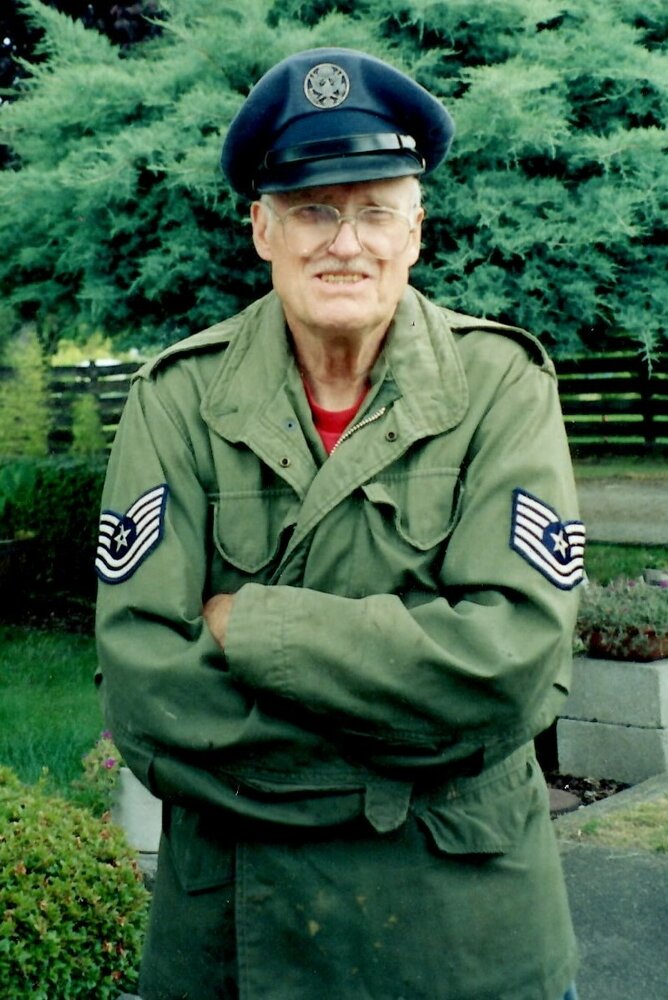 In the early quiet hours of July 3rd, 2022, retired Air Force Technical Sergeant George Harold Lore slipped away to join his beloved wife of 64 years in the heavenly stars. He had been on the earth 91 years.

George or “Harold” as he was affectionately known to his family, was born in the area of Greenup, Kentucky on January 14th, 1931, to Ruby (Ash) and George Washington Lore. He was the second of the five children the couple would have during their marriage. The family would move several times from Kentucky to Indiana and back following the work during the Great Depression.

Sadly, his mother Ruby would pass away when he was in his late teens and her loss was always in his heart. After suffering a serious illness, himself he would stay with his favorite aunt until he enlisted in the Air Force.

George would be stationed in many places all over the world including Germany where he was on the same base as Johnny Cash at the same time. His second assignment was England where he met the love of his life, Elizabeth “Lily” Byrne. He often told the story of how she was coming out of the restaurant where she worked in London and when he saw her, he told his friend that she was the one he was going to marry. They were wed on November 9th, 1957.

The service had the couple return to the state of Texas where they would welcome their first child in 1959, a daughter named Kym, followed in a couple of years by the birth of a son, Scott. After a transfer to a base in Lubbock, they welcomed a third child, Gary.

The Air Force would then again ask George to serve his country in France where he and the family stayed for a year before moving again to Athens, Greece. June of 1967 was a time of much civil unrest in the foreign lands where George was stationed, and it was during this time that George was awarded an Outstanding Service Award for his participation in helping 1,736 refugees from the Middle Eastern countries living in hostile environments. This award only reflected George’s willingness to be first to assist and show kindness towards others throughout his life.

After this time, the family would again return to the states while George went alone to serve in Thailand during the Vietnam War. Always a loving father, he brought back mementos of his time away for his children.

After a long career in the Air Force, George and family would settle in Myrtle Creek Oregon to be close to his brother Lowell Lore. The state of Oregon reminded him of his youth where he would spend time hunting and fishing. As the son of a farmer, he loved planting a huge garden each spring and enjoyed sharing the products of his work.

As time moved on, George and Lily delighted in becoming grandparents. Their grandchildren had fond memories of Grandpa George taking them in the small cart attached to his mower and weaving in and out of the trees on the property while Grandma Lily would jump out to surprise them. They loved taking long walks by the river, fishing at the dam, and spending summers going to the Douglas County Fair. George would sit for hours by the band stage to save seats for the family regardless of the hot temperatures. Some of the best times for George were seeing his musical heroes, especially Johnny Cash and Willie Nelson. He looked forward to that special time all year long.

In his later years, George and Lily would move to live with their daughter Kym and son-in-law Armando. George was surrounded by family and love in his final years. He would reminisce of his time as a child in Indiana and Kentucky, often talking about all the relatives he remembered and the times they shared. He enjoyed talking on the phone to his sister Doris and brother Carl about their lives. George especially loved the packages of homemade jelly that Carl would send him from Nevada.

George was a strong stoic man with a heart of gold that would give the shirt off his back for his fellow man, always the first to jump up to help anyone and generous to a fault with his family. His dry sense of humor and love of giving everyone a funny and unique nickname will be so very missed by all.

He is preceded in death by his loving wife of 64 years, Elizabeth “Lily” Byrne (2-16-2022), his parents George and Ruby (Ash) Lore, younger brother Lowell Lore and his sister Darlene Montgomery along with many aunts, uncles and cousins.

He is survived by his brother Carl Lore, his sister Doris “Frankie” Hurley, sisters Karen Stephens, Geraldine Laster, and brother Elbert Lore. George had so many nieces and nephews, but he would have liked to acknowledge the special love and support of Shannon and Marty Lore (Lowell’s children) and all the help with his arrangements by Bob Montgomery and Debbie Caskey (Darlene’s children).

With a grateful heart for all the time together the past six years, his daughter Kym (Lore) and devoted caregiver son-in-law Armando Amador are left mourning the loss of their beloved George. He also leaves behind many grandchildren and great grandchildren, Kiley, Armando Jr, Veronica, Mariah, Amanda Ashton, Mykel, Daryen, Analicia, Merari, Ezra, and Brooklyn. Also surviving is his son Gary Lore of Portland Oregon. One month after his passing George’s son Scott Lore of San Marcos, Texas left this Earthly world, reuniting with his beloved parents.

George, go rest high upon that mountain, all your work on Earth is done! You will forever and always be on our minds!

Share Your Memory of
George
Upload Your Memory View All Memories
Be the first to upload a memory!
Share A Memory