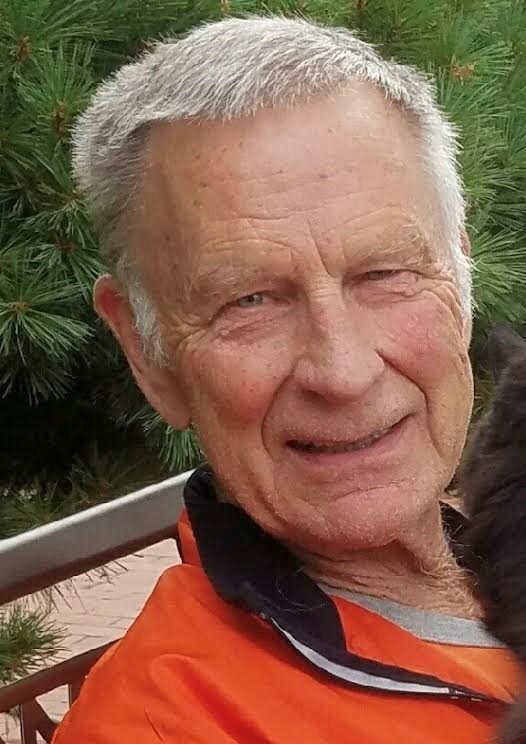 He died on August 13, 2022 while residing at the Genesis Adult Care Home in Gladstone. He was eight-seven years old.

Growing up in Sloan, IA. He learned to drive at age seven on a Model A. The family lived eight miles from the family farm. He would drive himself to the farm at age seven!

His dad, a State Farm Agent, was legally blind. John would drive him to his appointments at age 12. Age 13, the family moved to Salem, Oregon. He initially worked on the family farm and at the canneries.

John graduated from Salem Christian Academy in 1953. He also attended Willamette & Westmont Universities and then graduated from PSU in 1971 with bachelor degrees in business and psychology.

He entered the US Army in July, 1958. Was stationed in Honolulu where along with doing normal service, he also played trombone in the Army’s band and played third base for the Army’s baseball team—he had a tough assignment! He got injured in the Army but not the way one would expect. During one of his baseball games, a player slid into him at third base and shattered his ankle in fifteen places.  He was hospitalized for three months with his recovery. Through the years our family loved to tease him about this very difficult assignment he had in Hawaii!

He married Gwendolyn Miller in 1961. A year later, Kimberly Kay was born and her brother, Kirk Kent the following year. The couple divorced seven years into their marriage. As a follower of Christ, this brought him to a point of soul-searching. He got involved at Bethlehem Church in Lake Oswego where his faith grew deeper.

In 1972, he married an outstanding woman of God, Sandra Dickenson. The two of them were strong lay leaders at Bethlehem Church for many years, making a significant impact.

Throughout his life, John mentored men, helping them develop their relationship with the Lord so that they could be godly husbands and loving fathers along with being leaders in their communities. He had a deep concern for racial reconciliation and would meet with others to help facilitate that concern.

His careers included working for McKesson & Robbins and Glass Dahlstrom Printing and M&R Printing. Then, he formed his own LLC, Olson Communications, where he operated as a printing broker for forty years—coordinating printing jobs from start to finish.

He enjoyed men’s retreats at the Washington Family Ranch in the high desert. He was also very active with Good Samaritan Ministries in Beaverton. At one point, that took him to Senegal, Africa on a short-term mission trip.  Promise Keepers was a great source of encouragement for him. And he was very involved in PBL which stands for Portland Business Luncheons, which sought to introduce people in the business community to the hope of Christ. Finally, he really liked going to the Abbey at Mt Angel. He found it to be a great place for reflection on his relationship with Christ.

His hobbies were golf, watching the Oregon Ducks and other sporting events with a variety of friends.

John was a man who drew the respect of many people. He sought to live a balanced life.

He will be missed by so many of us. He now resides in Heaven in the presence of our Heavenly Father. He no longer struggles with CHF or liver and kidney failure. He has a perfected body. How can we say that? We say that in faith in God and faith in his word—the Bible.

Phil 3:20f But our citizenship is in heaven. And we eagerly await a Savior from there, the Lord Jesus Christ, who, by the power that enables him to bring everything under his control, will transform our lowly bodies so that they will be like his glorious body.

Please join us for a memorial service to celebrate the life of John N Olson. We will gather together on Saturday, October 22, 2022 at 2:00 pm. Lake Grove Presbyterian Church, 4040 Sunset Dr, Lake Oswego, OR 97035

Come to remember our beloved father and friend who will be greatly missed. Please bring your fondest memories of John to share. Reception following.

In lieu of flowers, please give to either organization which John loved

Going Home 2 assists men when released from prison to reintegrate in healthy  ways.  Upon making a contribution, click the box marked "Write us a comment" and state it is for the John N Olson Memorial Fund.

Or give online at

If you choose this, please send Good Samaritan Ministries an email at accounting@gsmusa.org and tell them that your gift is for the John Olson Memorial Fund.

To send flowers to the family or plant a tree in memory of John Olson, please visit Tribute Store
Saturday
22
October

Share Your Memory of
John
Upload Your Memory View All Memories
Be the first to upload a memory!
Share A Memory
Send Flowers