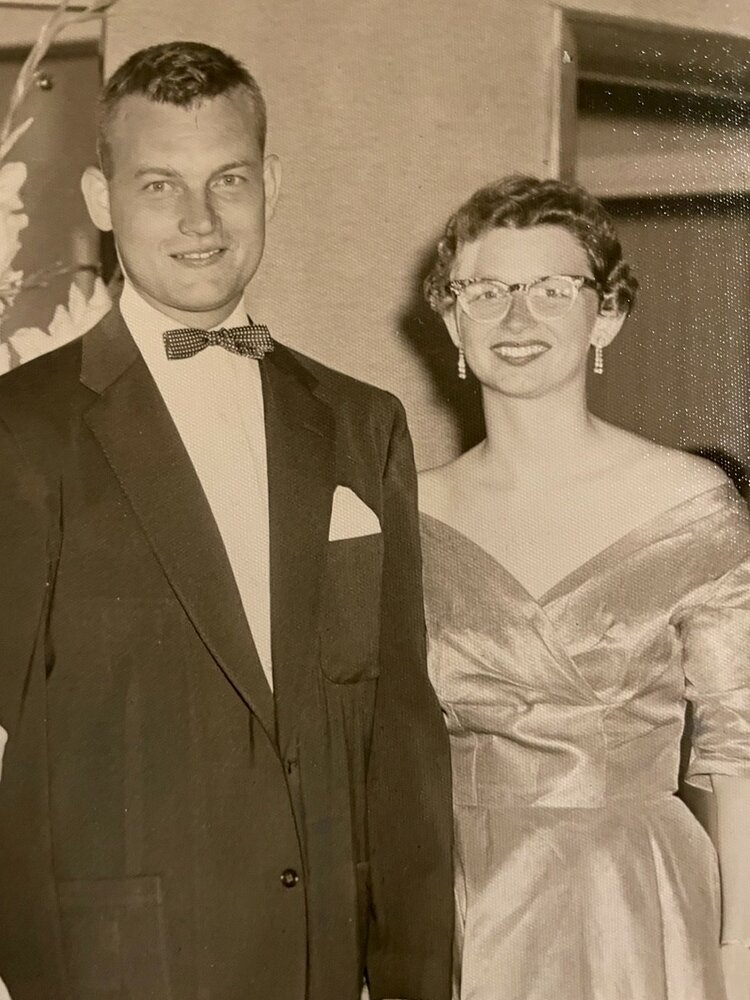 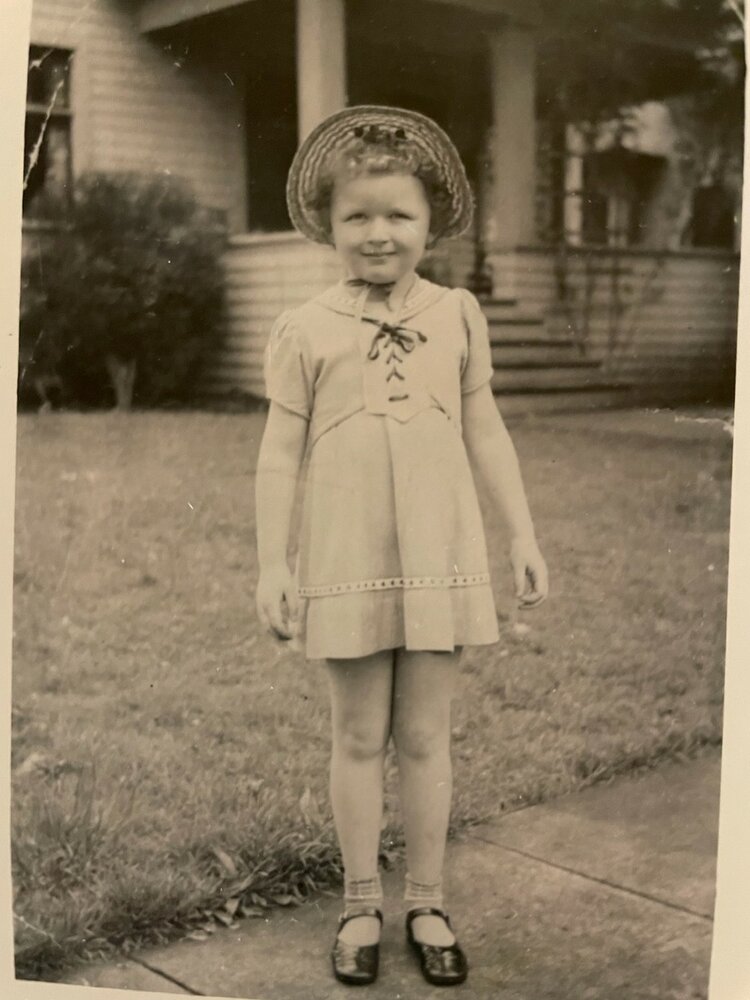 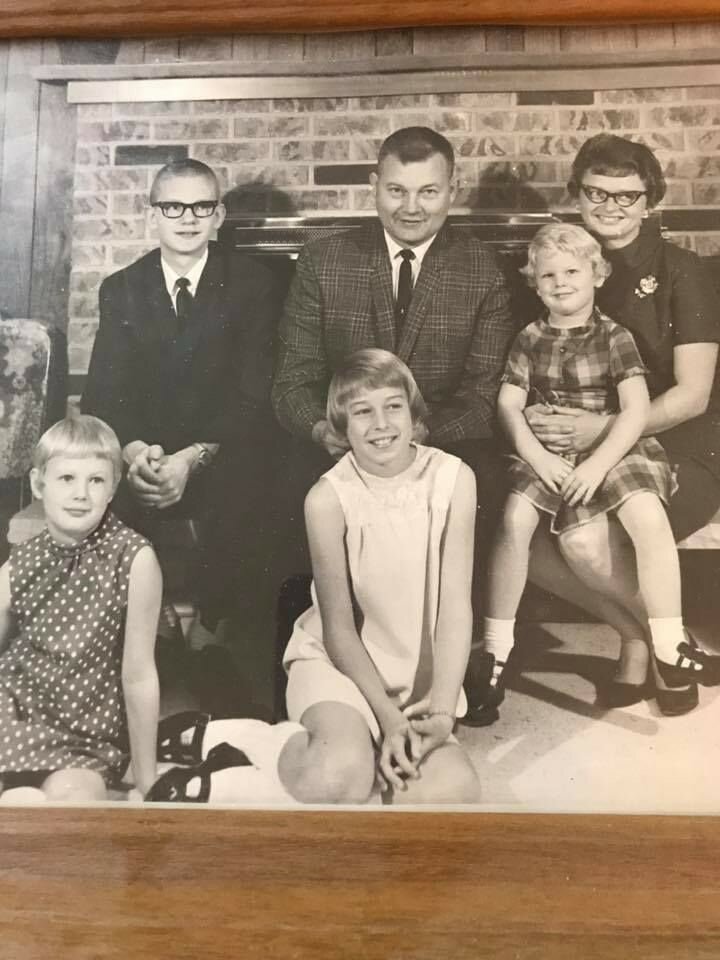 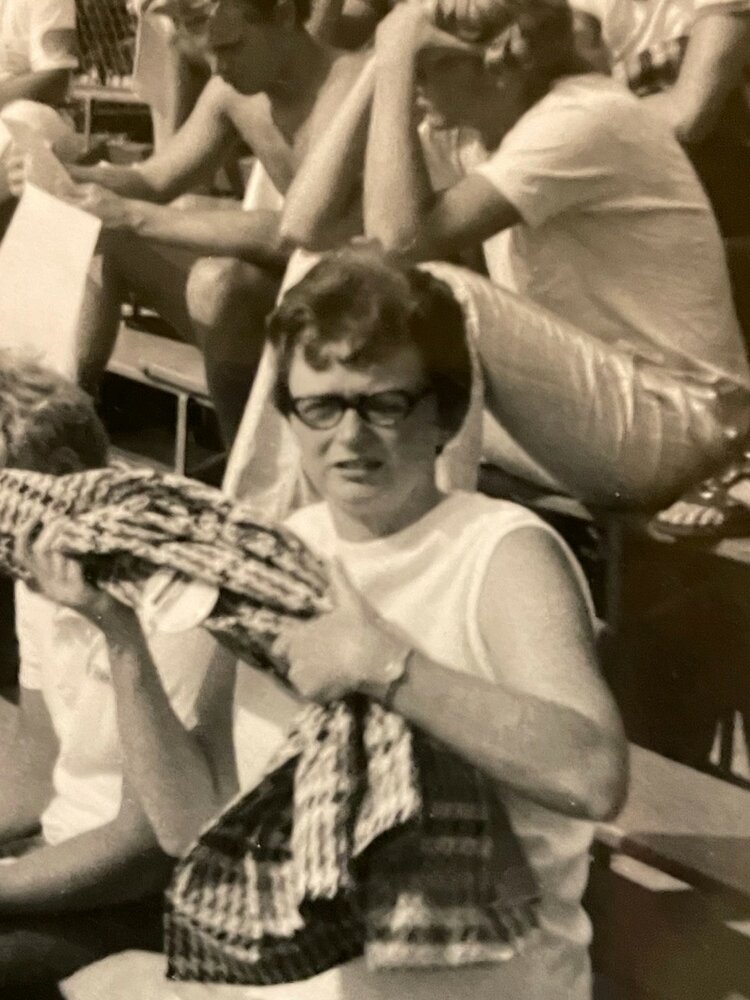 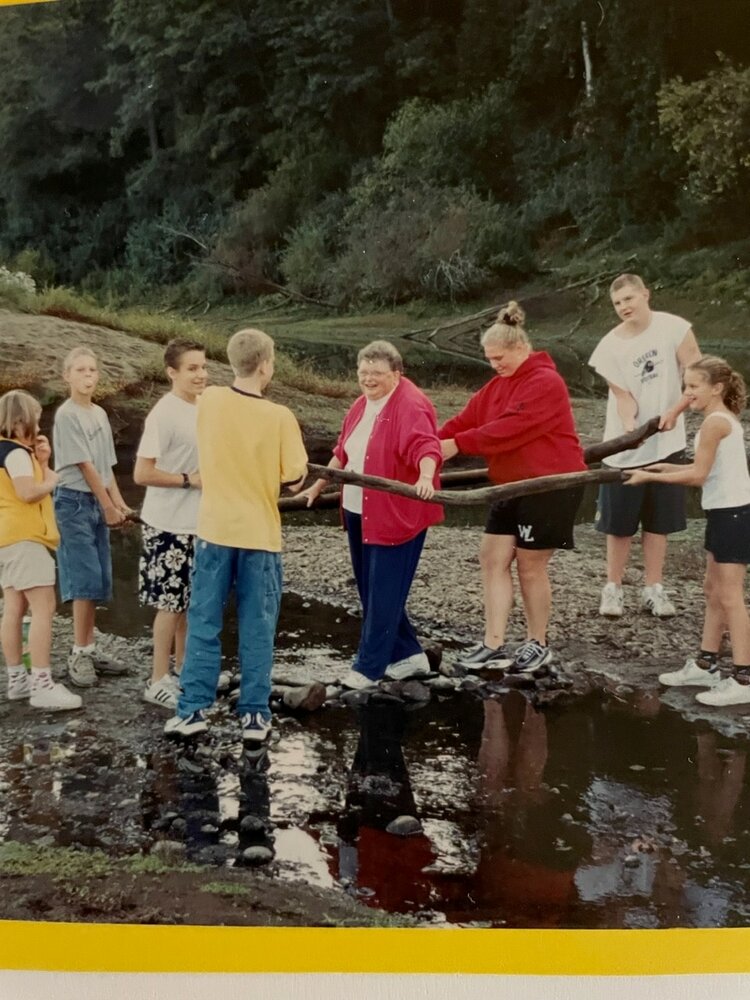 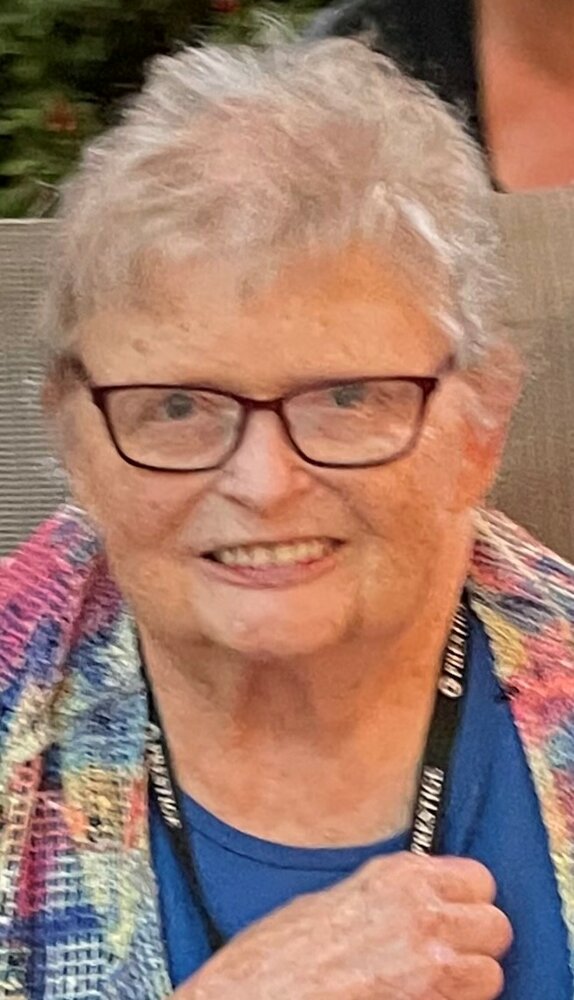 Joan Margaret was born to Charles & Alice Knight at Seattle, Washington’s Swedish Hospital.  Her family lived in a small house in Enumclaw, Washington.  Her Dad worked at the Rexall store as a pharmacist until the family moved to Eugene for a couple years while he worked for the Eli Company.

In Eugene they lived in a big two story house where the Thompson family lived on the top floor and they lived on the bottom floor. The big basement with a sawdust furnace, cement floors and a clothes line, was shared by both families.  Joan, her brother, and the Thompson’s two kids loved putting on plays using a blanket over the clothes line as a curtain for their shows.  They also loved roller skating in the basement. This might have been the beginning of her liking skits, plays and sports!

When her family moved back to Enumclaw they lived in a three bedroom house.  The back two bedrooms had a common closet and Joan was always going through it to help her brother…or console him when he was in trouble!  A memorable experience for her was coming home from school one day and hearing her Mom talking on the wall phone and finding out World War 2 had started.

Joan’s Dad, and his best friend from across the street when he lived in Puyallup, made the decision to buy the Rexall store in Enumclaw and named it Knight’s Rexall. She had the most comic books of any kid in Enumclaw because of the store. We found out her favorite comic book was Wonder Woman and when asked why, she does a fist bump with each arm!  Joan’s Dad ran the store until he become disabled. He had been diagnosed with multiple sclerosis. He spent his last year in the Enumclaw hospital, sold the pharmacy and passed away at the age of 42 when Joan was 13.

Joan went to Annie Wright Seminary for 7th grade.  After 7th grade, she came back to Enumclaw to help her Mom. During 8th & 9th grades, friends would stop by their house after school and sing while Joan played the piano. Her Mom taught them all how to dance.  She spent her 9th & 10th grade summers teaching Red Cross swim lessons at Petes’s Pool recreation complex. Her brother had her Dad’s old golf clubs so he golfed and caddied while Joan was teaching swimming and tennis lessons.

Joan, her brother, and Mom moved to Portland, Oregon in 1951. She entered Cleveland High School as a sophomore where she met her best friends in English class. They became very active during their high school years.  Joan was an officer of social clubs and student body, chairman of assemblies, and organized dances, beach trips and many other events. Her first of many big Broadway plays was South Pacific, watching from the top balcony. There were sleepovers at her house, with her playing the piano, and her Mom teaching them to dance. Joan enjoyed visiting with her friends’ parents and having book and political discussions at their houses over dinner. The friends continued to meet for luncheons through the years, then into old age they kept close with long visits discussing books and visiting at the beach.

Living close to Reed College made it easy for Joan and her friends to use recreational swim times at Reed’s pool. That’s where she met Glen Wilcox, who was not only a physics student at Reed but also the Athletic Director in charge of the summer sports & swim programs. Joan was able to teach swimming there in the summer.  The rest is history as they were married and worked side by side for 65 years!

After graduating from Cleveland High School in 1954, her friends left for college, she married Glen and the two of them created Play Haven Swim School & Day Camp after buying 40 acres on Mt. Scott. They owned and operated Play Haven for 28 years.

Play Haven Swim School & Day Camp was a place where kids and adults could learn to swim.  Kids could also come to Day Camp daily for the whole summer or parts of the summer.  While in camp there would be arts & crafts, fort building, learning to make campfires and outdoor cooking, archery, trampoline, hikes, and learning to climb trees the “lumberjack” way with the needed equipment!  In the early days there was also horseback riding twice a week.  In the later days tennis, basketball, and soccer were added. The campers got a swimming lesson four days a week with Friday being a swim “play day”!

Joan was mostly in the pool managing and teaching the swim lesson program. She also handled the bookkeeping and payroll.  There were a couple things unique to Play Haven swim lessons.  Groups for lessons were not by age but by ability. Kids and adults moved up to the next class level when they were ready, not when their peers were ready. From their very first year, if you were impaired or disabled in any way, you were included in both swim lessons and day camp. They taught hearing & sight impaired, amputees, mentally or emotionally challenged and kids with cerebral palsy and autism. These kids were never separated-they fit right in with the other kids who learned to accept everyone.  Joan loved each & every kid! As Jeani said, “I was fortunate to teach alongside Joan and have her for a mentor and a role model for twenty years!”  As insurance rates & property taxes increased, the costs of running Play Haven got to be too much.

There will never be another Play Haven.  Joan and Glen made it a once in a lifetime magical place for thousands of kids who were lucky enough to experience it. Their own kids, the 4K’s, were fortunate enough to learn to swim at young ages, attend day camp during the summers as kids and later become camp counselors and then managers of the camp.

When Play Haven closed, Joan & Glen took a new course.  Joan went from swim education to accounting and computer education. They created CompuCount, a bookkeeping, accounting software & training company which ran until 2009. CompuCount ran alongside their son Kim’s accounting business.  Joan was a payroll expert and an excellent teacher in how to use the software.  She had her associate’s degree and took enough classes to have a couple regular degrees. Joan loved to learn & loved the learning process.

Over the years, Joan was very involved in the community.  She volunteered at the elementary school helping students with reading, writing & math.  She was treasurer for the David Douglas swim team for many years and helped with fundraising events.  Learning was important to Joan throughout her life.  She was very active in her kids’ schooling and made sure they were exposed to a variety of  cultural and social experiences, encouraging them to be involved.

Joan was a voracious reader all her life! There was hardly a time when she did not have a book or her Kindle with her!  She played bridge, was involved in home extension, bowled, played the piano and sang, spent vacations camping at Crane Prairie, golfed at Top O’Scott and later Pleasant Valley, volunteered to do the bookkeeping for The Dougy Center as they were being established, attended plays & operas with family and friends.

Joan & Glen supported their kids in their athletic, musical and other activities. One winter they attended all of Kristi’s high school basketball games, Kylie’s Mt Hood Community College basketball games and many of Kari’s Oregon College of Education basketball games-home & away! In her later years, sports still play an important part of her life as she loved watching her Blazers, Mariners, OSU & U of O football and basketball. She asked questions and kept up on the players and teams.

Grandma Joan LOVED her Grandkids!  She played games & cards, swam with and taught them to swim, acted out skits and took them to Shakespeare plays in Ashland. She had  “Grandma boxes” for each one at her house for art, math & writing activities. She kept boxes of toys at her office for when they visited and in her later years ones for them to play with in her apartment. Grandma Joan went to as many of their sports, plays and musical activities as she could. She truly enjoyed all of them throughout her life and was always asking them questions!

Joan was so very personable, very tuned in and truly interested in all of her kids' friends & their conversations, too. She was a second mom & grandma for many right up until she passed away.

After living in Portland for most her life, Joan’s last years were as a resident at Huntington Terrace Gresham in her own apartment. As she said in her 2021 Christmas letter, “My assisted living place is quite good for me as they help with showers, medications, cooking, cleaning & clothes upkeep.” As a family, we thank Huntington for being a special place for Mom. We appreciate the wonderful, caring staff. The extra time staff spent chatting with her was very special as that was Mom’s “Super Power”…listening and being a personable individual. She forged friendships there and took employees under her wing as a mother/grandmother figure. Thank you.

Joan, A BRIGHT, INQUISITIVE STAR, passed away August 24, 2022, surrounded by family in her Gresham apartment, of congestive heart failure after two weeks in the hospital.

Joan was preceded in death by her husband of 65 years, Glen, her parents, Charles and Alice Knight, and daughter Cynthia Wilcox Sherrer.

You can meet the 4K’s at 1:30p.m. at PlayHaven Park-The Big Field-for a short dedication.  You can park at the church and hike up, or parking is available along the street closer to the park if you prefer.

Private burial will be at Willamette National Cemetery.

Donations can be made to The War on Melanoma

“War on Skin Cancer”  In memory of Joan Wilcox

Share Your Memory of
Joan
Upload Your Memory View All Memories
Be the first to upload a memory!
Share A Memory
Send Flowers