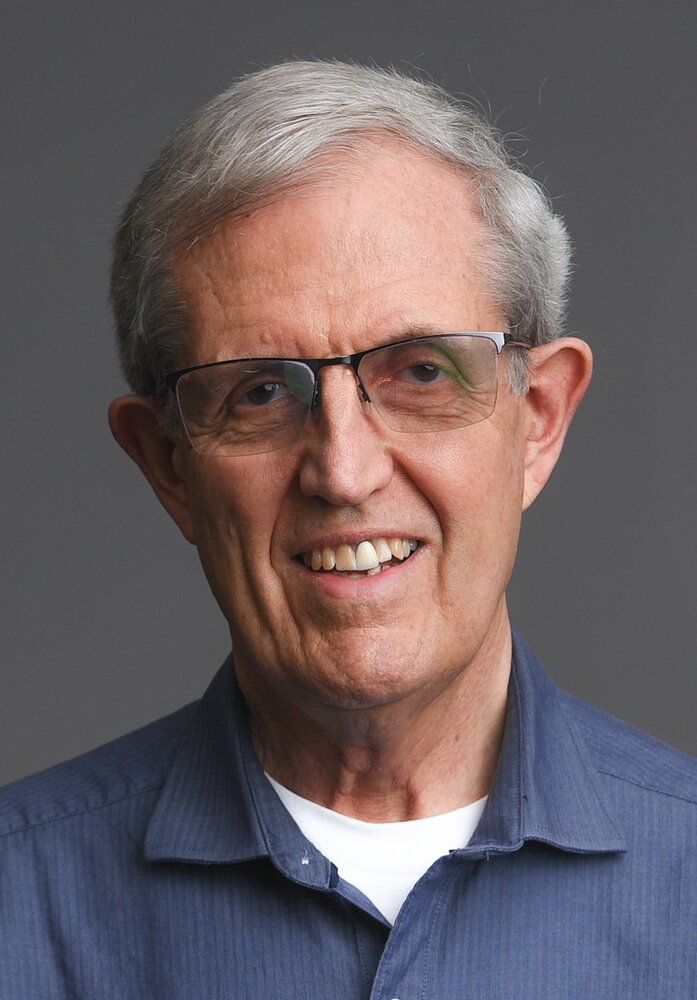 For many of us, Ron’s life ended too soon. We were stunned. Yet as we review his life and influence, God’s glory shines so brightly, we can only praise God and thank him for our friend.

Ronald Gene Stansell was born in Caldwell, Idaho on January 17, 1943 to Edwin and Vera Stansell. The Stansell farm outside Homedale, Idaho raised potatoes, sugar beets, alfalfa seed, seed corn and cattle. Ron did his share of farm chores, but even as a young boy he knew he enjoyed reading books more than milking cows.

Other children born into the family included three brothers and a sister, and, a few years later, three stepbrothers and three stepsisters. Having 10 siblings helped Ron become a team player and peace maker, as his life would bear out.

The Homedale Community Friends Church was not a part of the Stansell family life, but Ron’s grandmother was a faithful member, and his mother often took Ron and his siblings to Sunday school. It was during his time in the junior high youth group that Ron decided to become a follower of Jesus, a decision that took root and grew in the years to come, especially when his parents also decided to follow Christ.

During his high school years, he commuted with a group of other students to Greenleaf Academy. And in 1961 Ron entered George Fox College with a major in history and religion.

Ron developed as a leader during his GFC years, serving as editor of the campus newspaper, The Crescent, and as student body president his senior year. Concurrent with these jobs, he was on the Friends Youth executive committee of Oregon Yearly Meeting, serving a time as president. He also traveled in the yearly meeting’s youth ambassador program, including a summer short-term mission trip to Bolivia.

It was while he was editor of The Crescent that he developed an interest in another staff member, Carolyn Hampton. Carolyn was also conveniently part of the Friends Youth leadership team, so they worked together on many projects. In fact, they worked so well together they decided to continue the practice and were married in 1966, a year after his graduation from GFC. Sharing in family and ministry would become a way of life.

Ron entered Western Evangelical Seminary soon after his graduation. The newlyweds were preparing for their future in the pastorate. Even so, they both began feeling drawn to the mission work in Bolivia. The mission board responded to this interest, asking them to consider going to the field almost immediately, committing to helping Ron finish his seminary M.Div. degree during furloughs from the field (which de did in 1975).

Ron and Carolyn moved to Bolivia in 1967, under the mission board of Oregon Yearly Meeting. They would stay until 1985. The focus of Ron’s work was in theological education and pastoral training for the Bolivian Friends Church. He was instrumental in beginning the theological education by extension Bible school program and the San Pablo Seminary, both interdenominational programs that have influenced generations of Bolivian Christian leaders. Ron was also active in the formation of the Bolivian Evangelical University in the city of Santa Cruz and served a time as the Dean of the Theology Department.

The family moved back to Oregon in 1985 and Ron began a doctoral program in missiology at Trinity Seminary in Illinois, traveling several times a year to earn his doctorate in 1989. In the meantime, he accepted a job to teach Bible literature at George Fox College, a job that extended over 25 years and eventually focused on mission and intercultural studies.

During the final GFC years, Ron and Carolyn developed and led the college’s Study Abroad Program in Bolivia, in cooperation with the Bolivian Evangelical University. For five years they accompanied groups of students for a semester of study and intercultural learning, an experience that proved transformational for the young people.

Since his return to the US in 1985, Ron served as part of the board of Evangelical Friends Mission, a mission agency uniting various yearly meetings across the nation. In 1992, he became director of the newly organized Evangelical Friends Church International. As part of this responsibility for the following 20 years, Ron and Carolyn traveled extensively, getting to know and minister to Friends and family in over 40 countries.

In his retirement years right up to the time of his death, Ron held leadership roles in his local congregation, Newberg Friends Church, and in Friendsview Retirement Community, where he and Carolyn lived.

Looking back over the life of Ronald Gene Stansell, the themes that stand out are the primacy of family, the importance of friendship, servant leadership, a focus on education, and a ministry of encouragement. Undergirding it all was Ron’s passion for prayer, study of the Scriptures, and nurturing his relationship with his Lord and Friend, Jesus Christ.

We lost a leader and a friend when Ron went home to be with his Lord on November 9, 2022 after a very brief struggle with leukemia. But we carry with us the influence and inspiration of this strong and gentle man of God. To God be the glory.

Donations in memory of Ron can be made to Evangelical Friends Mission Leadership Training.

Share Your Memory of
Ronald
Upload Your Memory View All Memories
Be the first to upload a memory!
Share A Memory
Send Flowers