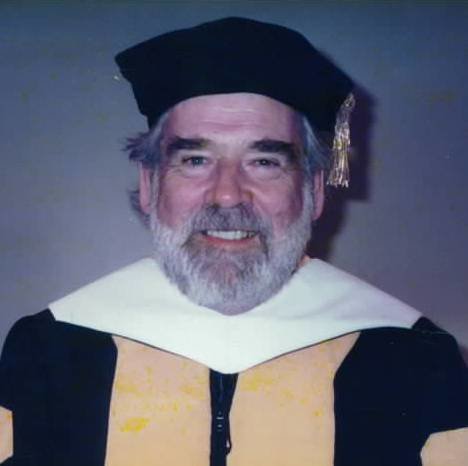 Dick was born in Aberdeen, Washington, to Esther and Laurence Engen in 1927. He died in Salem, Oregon, at the age of 83 on July 15, 2011. That was two days after his 36th wedding anniversary to his wife, Rebecca Bartels Engen. They married on July 13, 1975, at her family’s farm in the country near Salem, Oregon. After graduating from Weatherwax High School, Aberdeen, in 1946, it was Dick’s dream to attend college. He enlisted in the Army’s Alaska Communication System at the end of World War II hoping it would get him to Alaska. However, he spent 2 years in Seattle writing press releases and assembling a unit bulletin. The GI bill made his dream of college come true. After his army service, Dick attended Northwestern University in Evanston, Illinois, where he got his undergraduate degree. It was during this time that, needing a part-time job, Dick applied to be a bookmobile driver for Evanston Public Library. Thus began his love of working in the world of libraries. He then attended the University of Washington where he received his Masters of Library Science degree. As time passed, Dick worked in Seattle (Seattle Public), Independence, California, (Inyo-Mono County Library system) and at the Oregon State Library in Salem. Then his dream job came along. In 1967 Dick was hired as the Director of the Alaska State Library. Alaska was new to statehood (1959), and there was much to do. During his tenure the number of libraries in the state increased from 37 to over 100. He developed a statewide library network linked by computers. He also set up a state film library and facilities for the blind and handicapped. The Alaska State Museum also came under his directorship. Alaska is a huge state in area, so sometimes providing services had to be done with innovation. Because Alaskans fly a lot, the free “fly with a book” program started in Alaska airports. In Southeast Alaska, the “book boat” was used to deliver library service to small villages and logging camps. In 1986 Dick retired after 19 years. He’s often referred to as the “father of Alaska libraries” in 1996 Dick was presented an Honorary Doctor of Letters by the University of Alaska Anchorage. In their words, “The University of Alaska is honored to recognize his foresight, hard work and dedication to the state of Alaska”. In 1979, Dick and Rebecca decided to sell their home and live on a boat. They lived on the boat until Dick’s retirement and kept the boat for another 7 years in Poulsbo, Washington. They had many adventures and made lots of memories. In addition to boating and fishing, Dick loved acting in community theatre, model railroading, stamp collecting, Carpentry, art and music. In 1986 they moved to Lincoln City, OR, and took on the remodeling of their beloved beach house. In 2004 they moved to Woodburn, Oregon, where they lived until Dick’s death. Dick was preceded in death by his son Kegan, sister Peggy Parker and niece Patti. He is survived by his wife, Rebecca, daughter, Kristen Isakson, Alaska, sons Paul Engen, Kyle Engen and Tobin Engen and their families. He is also survived by his nephew, Gary Parker, Alaska. Dick was a member of the Woodburn Eagles, Keizer Elks and Canby American Legion. At his request, no services will be held. Contributions in his name may be made to the Alaska Library Association, c/o Patricia Linville, Treasurer, Seward Community Library. P. O. Box 2389, Seward, Alaska, 99664.
To send flowers to the family or plant a tree in memory of Richard Engen, please visit Tribute Store
Services for Richard Engen
There are no events scheduled. You can still show your support by sending flowers directly to the family, or planting a memorial tree in memory of Richard Engen.
Visit the Tribute Store